Seven in one blow

Partager Tweeter
Tank installation | Seven in one blow
Deep inside the Tokamak Building is a room large enough to accommodate a three-storey building. The floor and lower walls are lined with stainless steel plates; like stars on the firmament, hundreds of embedded plates dot all other surfaces. 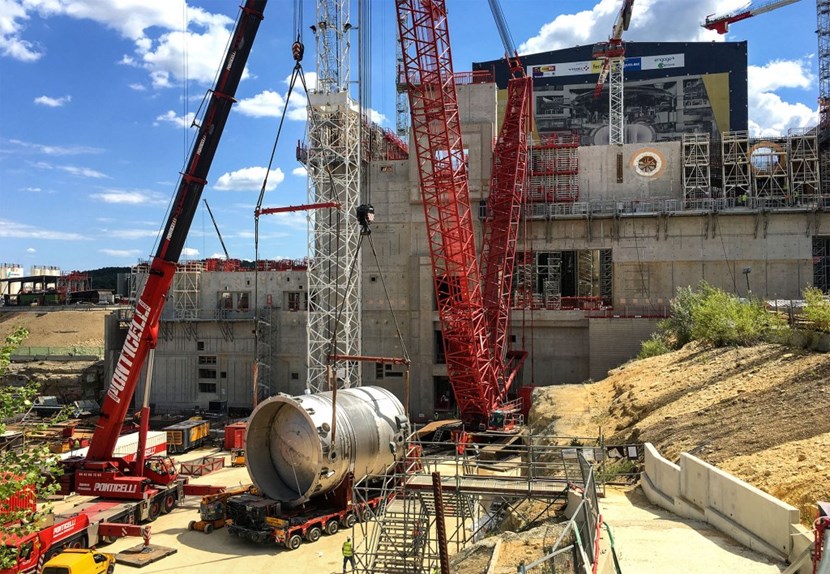 In one of the most spectacular installation activities performed yet in the Tokamak Complex, three drain tanks and four vapour suppression tanks were installed during the week of 14 August.
The drain tank room, 40 metres long, 15 metres wide, and 11 metres high, was designed to house seven containers with volumes ranging from 100 to 210 cubic metres: three drain tanks to support normal operation, maintenance and water collection following an accident in the machine; and four vapour suppression tanks to protect the vacuum vessel against overpressure in the case of a "loss of coolant accident" in the vacuum chamber.


With its leak-tight floor and lower-wall lining, the room acts like a "drip pan." In the improbable case of a leakage from any of the tanks, the contaminated water would remain contained within. In a way, the drain tank room is itself a tank.


The installation of the seven tanks, an operation that began on 14 August, was the most spectacular installation activity performed as yet in the Tokamak Complex.


The very nature of the tanks—classified within French safety regulations as nuclear pressure equipment (ESPN)—required the implementation of special procedures and control points for validation at every step: from transport out of storage, to lifting and handling, and finally to transfer on air pads to the final positions in the room.

The tanks that are now installed in the bowels of the Tokamak Building are part of one of the key safety systems of the machine.

Two large drain tanks (210 m³) and a small 100 m³ tank belong to the Tokamak's cooling water system, which is designed to remove the heat from the components closest to the plasma. Contributed by the United States, the tanks were manufactured by the Joseph Oat Corporation, a sub-contractor to AREVA Federal Services based in Camden, New Jersey.

The four other tanks (stacked in two columns) are part of the ITER pressure suppression system, which protects the ITER vacuum vessel from over pressurization in the case of loss of coolant to the in-vessel components. These tanks were procured directly by the ITER Organization from a Chinese consortium (Chinese Nuclear Power Engineering Co Ltd and Suzhou THVOW Technology Co Ltd).

Another challenge was the chamber's topography. Tanks measuring up to 6.7 metres in diameter had first to pass through an opening only slightly larger (7 x 7 metres), then to be moved along the narrow room with manually operated hydraulic jacks in order to make room for the next.


The four vapour suppression tanks, half the height of the drain tanks but almost as heavy (close to 100 tonnes), were the first to be installed. Once deposited on the floor and paired (one tank sitting on top of the other) they were skidded to one side of the room. 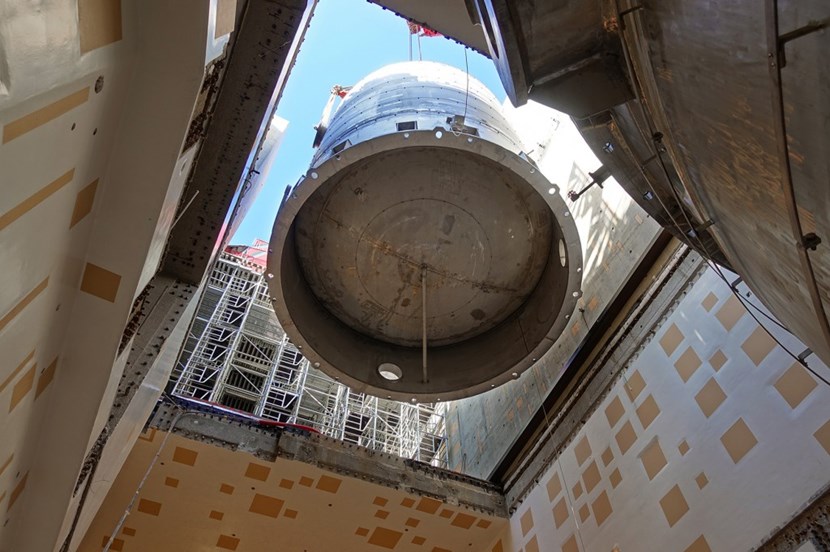 Measuring up to 6.7 metres in diameter, the tanks had to pass through an opening that was only slightly larger. In four days, 600 tonnes of steel tanks were installed in the lowest basement level of the Tokamak Building.
Next, the three drain tanks followed the same sequence and, by Friday 17 August, the operation was complete. In four days, working from dawn to dusk, the teams installed 600 tonnes of steel tanks and the opening in the ceiling of the drain tank room can now be closed to allow work to continue on the level above.


Completed successfully, safely and on schedule, this major achievement was the demonstration of efficient team work and perfectly coordinated activity across multiple contractors operating under the responsibility of the European Domestic Agency: ITER logistics provider DAHER (for transferring the tanks out of storage) and Tokamak Complex works contractor VFR (plus subcontractor Ponticelli) for lifting and installation.