Partager Tweeter
Power conversion | Alien structures and strange contraptions
There are places in ITER that seem to belong to another world, places full of alien structures and strange contraptions. The feeling—a mixture of awe and puzzlement—is especially acute inside the Magnet Power Converter buildings, two 150-metre-long structures located between the 400 kV electrical switchyard and the Tokamak Complex. In these vast and, for the moment, half-empty spaces, size and complexity challenge every familiar object and notion: wall sockets resemble rocket exhaust nozzles, extension cords are as thick as an overhead crane beam, switches approach the size of a small truck, and electrical cabinets have the complexity of a giant microprocessors. 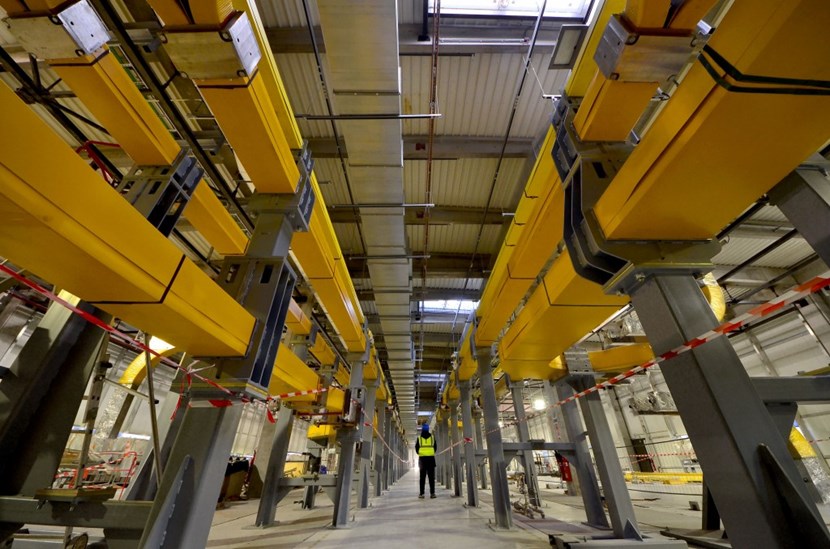 Thicker than railroad rails, the DC busbars are steel-jacketed aluminium bars actively cooled by a constant flow of pressurized water. There will be no less than 5 kilometres of busbars at ITER, including those that connect electrical equipment and run half the length of each of the Magnet Power Conversion buildings on elevated supports.
The twin Magnet Power Converter buildings are the ITER equivalent of a smartphone or laptop charger: their function is to convert alternative current (AC) into direct current (DC) and to feed it to the Tokamak's magnetic system. In a phone charger, however, the intensity of the current is of the order of one amp; in the Magnet Power Converter buildings it reaches 65,000 amps for the largest of the ITER magnets.


Powering 10,000 tonnes of superconducting magnets requires a massive and extensive industrial infrastructure. Current from the grid must undergo a cascade of transformations before reaching the individual magnet feeders: first, the voltage is stepped down from 400 kV to 66 kV or 22 kV by the three very large transformers of the pulsed power electrical network; then, depending on which magnet the current is destined for, the voltage is transformed from 66 kV or 22 kV to approximately 1 kV by a set of 29 transformers located in concrete bays along the outside walls of the buildings.


The 1 kV AC current reaches the converters inside of the buildings by way of thick metallic bars, called "busbars," that pass through the interior/exterior barrier through large "wall sockets" that look like a rocket's exhaust nozzle ... Each converter is connected to a strange contraption made of stacked coils and cables—a "reactor," which acts like as a filter to smooth the spikes in the DC current's waveform. There are 12 such pairs in one of the building, 17 in the other, each dedicated to a specific circuit, coil, or coil module (in the case of the central solenoid).


Once the DC current has been "cleaned" by the reactor it can be fed to the magnets. However, the current intensity is such that it cannot be transported by conventional cables. Here again busbars (slightly different from the AC busbar that connect the outside transformers to the converters) will do the job.


Thicker than railroad rails, the DC busbars are steel-jacketed aluminium bars insulated in epoxy wrapping and actively cooled by a constant flow of pressurized water. There are no less than 5 kilometres of busbars planned at ITER to connect electrical equipment and running half the length of each building on elevated supports.


In order to reach their assigned clients (toroidal and poloidal field coils, central solenoid modules, correction coils) busbars will travel from the Magnet Power Conversion buildings to the Tokamak Building along twin 50-metre-long bridges. On the last leg of the journey, the busbar network, along with the fast discharge and switching network units, will almost fully occupy two levels of the Diagnostics Building.


The busbar network installation required for First Plasma is now 92 percent complete in the first of the twin conversion buildings, and 72 percent in the other. All 32 converter units should be installed by 2021. The science-fiction décor, half-empty for the moment, will soon be packed to the brim.