Partager Tweeter
Last leg of a long journey | Japan delivers D-shaped coil
What makes a component unique, beyond its size and weight, is the sum of work and the sophistication of the technologies that go into its fabrication. In this respect, the ITER D-shaped toroidal field coils are in a league of their own: standing 17 metres high, weighing close to 350 tonnes, they are among the largest superconducting magnets ever built and their production, from initial design to finalization, spanned three decades, involved more than one thousand people and mobilized 50 different companies and institutions. 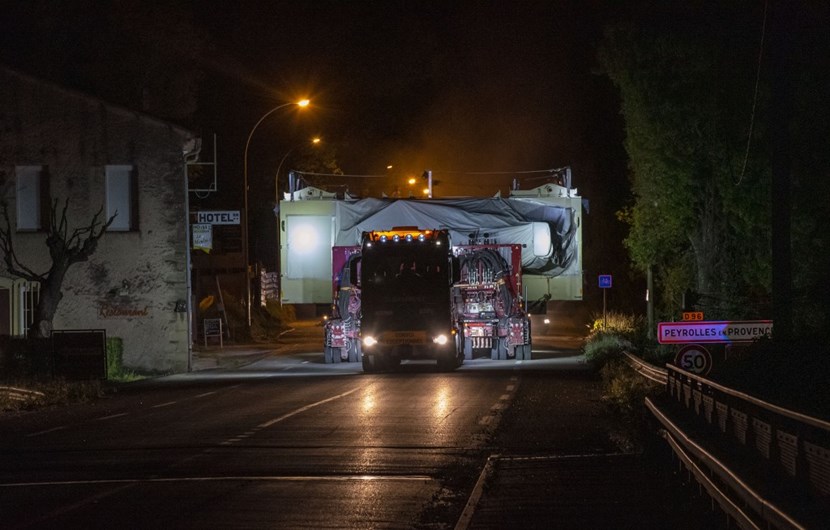 The trailer prototype that was developed to transport the ITER D-shaped coils is both ultra-powerful (2,000 hp) and extremely manoeuverable (342 wheels). It is pictured here as it passes the village of Peyrolles-en-Provence, 17 kilometres to the west of the ITER site.
Such exceptional components, which form the core elements of the ITER Tokamak, require exceptional care in their handling and transport. Every movement, whether during loading and unloading operations, sea voyage, or land journey, must be anticipated and carefully planned.


The land journey along the 104-kilometre-long ITER Itinerary, between Marseille industrial harbour and the ITER site, is particularly challenging. Some of the country roads that the convoy travels are only a few centimetres wider than the steel frame that encases the coil; several turns are sharp; a few climbs are steep.


Hauling such heavy loads (600 tonnes between component and transport vehicle) requires more horsepower than regular trucks can provide, and more gently distributed. For the ITER toroidal field coils and the other ultra-heavy loads that will follow, the Dutch transporter Mammoet, operating as a contractor to ITER global logistics provider DAHER, developed a prototype trailer whose twin "power packs" deliver the horsepower equivalent of six conventional truck tractors. 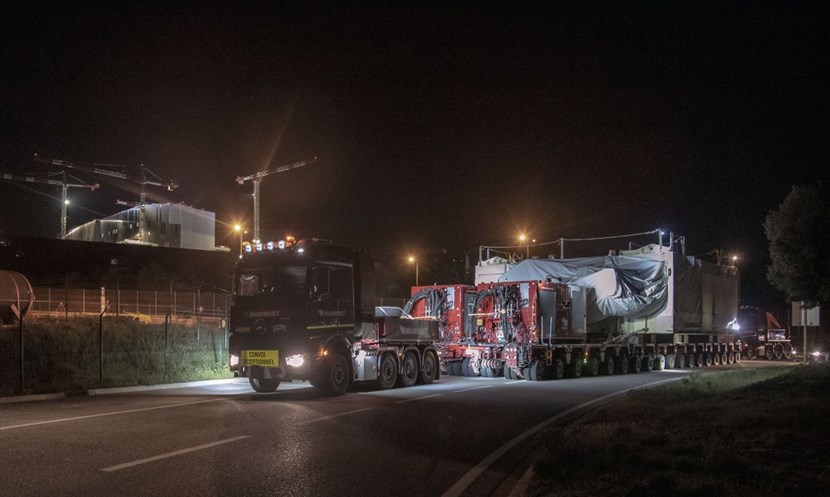 It is close to 2:00 a.m. and the journey from the other side of the world is almost over. Framed against the backdrop of the Tokamak Complex, the convoy will now take the heavy-haul road to the construction platform.
The prototype trailer made his first outing on 13 April to transport the first of the ITER D-shaped coils (TF#9), procured by Europe, from Marseille industrial harbour at Fos-sur-Mer to the ITER site. Having delivered the load on 17 April, it was back at Fos-sur-Mer the following day to load a second coil (TF#12) that had arrived from Japan ten days earlier.


TF#12 travelled the last leg of its journey from the other side of the world during the night of Friday 24 to Saturday 25 April (see gallery below).


By then, both coils were safely "home" on the ITER site—TF#9 stored in a dedicated workshop; TF#12 being moved to temporary storage in the recently vacated Cryostat Workshop.


A towering presence in their respective storage places, both coils will soon enter into "mechanical preparatory activities" such as welding cooling pipes, attaching clamps, and welding interfaces) prior to being integrated into the assembly process.


There will be several more occasions to be impressed by the sight of a D-shaped coil convoy snaking along narrow country roads and passing sleeping villages in a flurry of rotating light. There are still 17 such loads to be delivered to ITER over the next three years. The next in line, TF #13, left the Mitsubishi Heavy Industries facility in Futami, Japan, on 26 April.