Far more than a fancy ashtray

Share Tweet
Divertor | Far more than a fancy ashtray
It has been likened to the filter of a swimming pool or an oversized ashtray. It has been called alien in shape and hellish in its affinity for heat. But whatever the analogy, the ITER divertor is an impressive product of scientific, engineering, and logistic ingenuity. 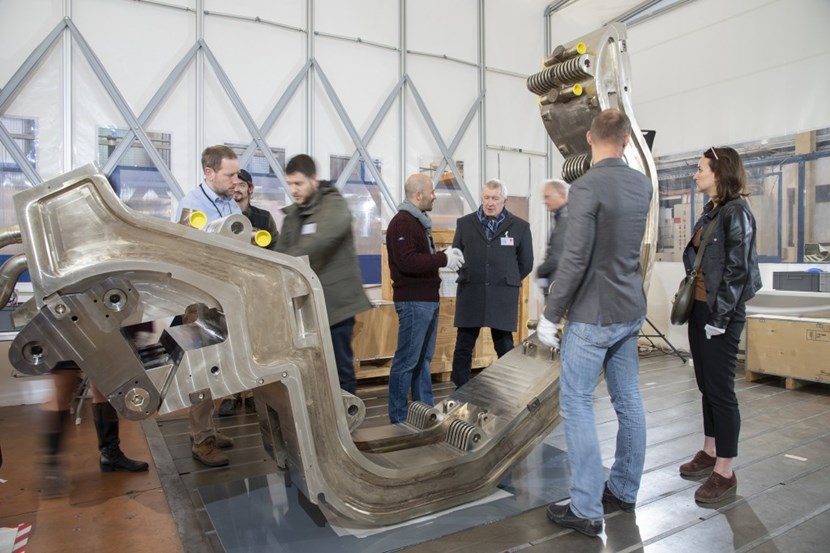 Members of the ITER divertor team examine a cassette body prototype produced by the CNIM-SIMIC consortium under contract with the European Domestic Agency. The prototype recently underwent final acceptance tests, including leak-tightness and dimensional inspection tests, next door to ITER at CEA-Cadarache. Photo: Christophe Roux (CEA)
The divertor is really a heat exchanger on an epic scale responsible for exhausting debris—or "helium ash"—from the super-hot plasma to maintain the fusion reaction inside the tokamak.
As ions and electrons in the plasma move along field lines created by the superconducting magnets of the tokamak, the impurities are driven to the divertor strike points at the bottom of the vacuum vessel for evacuation and recycling. The plasma-facing units of the divertor must resist heat fluxes as strong as 20 MW per square metre—more than four times higher than that experienced by a spacecraft entering Earth's atmosphere.


Consisting of 54 "cassette assemblies," each fitted with three plasma-facing components mounted on a steel body with a variety of diagnostic and operational instruments, the divertor is a huge puzzle with hundreds of pieces that must be assembled and installed with sub-millimetric precision. 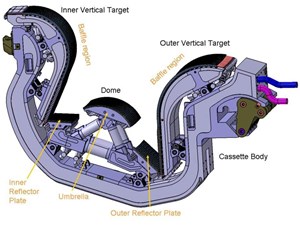 The basic components of the divertor, including cassette body, vertical targets, and dome. Fifty-four 10-tonne cassette assemblies will be installed by remote handling during the second phase of ITER assembly (post-First Plasma).
Weighing nearly 5 tonnes, each cassette body is a stainless-steel structure designed to house the plasma-facing components of the divertor while resisting transient electromagnetic-induced loads as high as 100 tonnes.


This month, members of the ITER Divertor Section visited CEA-Cadarache (next door to the ITER site in France) where, as part of a contractual partnership between the ITER Organization and the French Alternative Energies and Atomic Energy Commission (CEA), a cassette body prototype built by the French-Italian consortium CNIM-SIMIC recently underwent final acceptance tests, including leak-tightness tests and dimensional inspections.


Such final tests will be performed by the ITER integrator on all 58 cassette bodies (including 4 spares). The European Domestic Agency, Fusion for Energy, has awarded contracts for a first batch of 19 identical cassette bodies to Walter Tosto (Italy, 15 units) and CNIM-SIMIC (4 units, to be built in France). Contracts for the remaining 39 cassette bodies, which have an added level of complexity due to interfaces with diagnostic instruments, will be awarded later.


Armoured by 300,000 individual monoblocks of tungsten—the element with the highest melting temperature of any metal—the targets of the divertor will receive the heaviest thermal loads inside the machine.

Evacuating this heat requires an innovative "active cooling" process, in which pressurized water is pumped through copper alloy tubes running through the monoblocks (see GIF). As twisted copper rods twirl through the tubes, heat is conducted away from the plasma-facing components into the water and carried away. Water enters at a temperature of 70 °C and exits at 120 °C—and yet it is essential that it does not boil, which would reduce its ability to absorb and remove heat.


To prevent a so-called "burn out" boiling crisis, which could damage the cooling system and trigger costly delays, a series of acoustic instruments will listen for bubbles in the water lines and work in coordination with other sensors to monitor the health of the components.


Actively cooled plasma-facing units similar with the ones that will be used in the ITER Divertor are currently being put to the test in the WEST tokamak of CEA Cadarache. By deliberately misaligning experimental sections of the tungsten monoblocks and exposing them to long-pulse plasmas similar to those that will exist in ITER, the WEST Joint Team is documenting the importance of perfect manufacturing.


If just one surface monoblock is misaligned, due to the shallow angle of incidence of the magnetic lines, its exposed face will receive extra-large thermal loads and could melt, having a deleterious effect on the purity of the plasma and potentially damage the next plasma-facing units.


Sensors for diagnostics and operation


Some divertor cassettes will also carry diagnostics and operational instruments to allow engineers to monitor their structural behaviour. Three of the cassette assemblies, for example, will house highly sensitive fibre optic sensors capable of measuring temperature, strain, displacement, and vibrations inside the chamber. These sensors must be resistant to extreme amounts of radiation from both gamma rays and free neutrons at levels that have never been achieved by industry.

Special fibres, made of non-standard Fiber Bragg Grating, have been tested for radiation resistance by the National Nuclear Center of the Republic of Kazakhstan as part of a Cooperation Agreement signed with the ITER Organization in 2017.


Once the cassette assemblies are fitted with plasma-facing components and sensors, they will be inserted through the lower port windows of the machine and locked into place on carefully aligned rails at the bottom of the chamber by specially designed robotic handling tools. 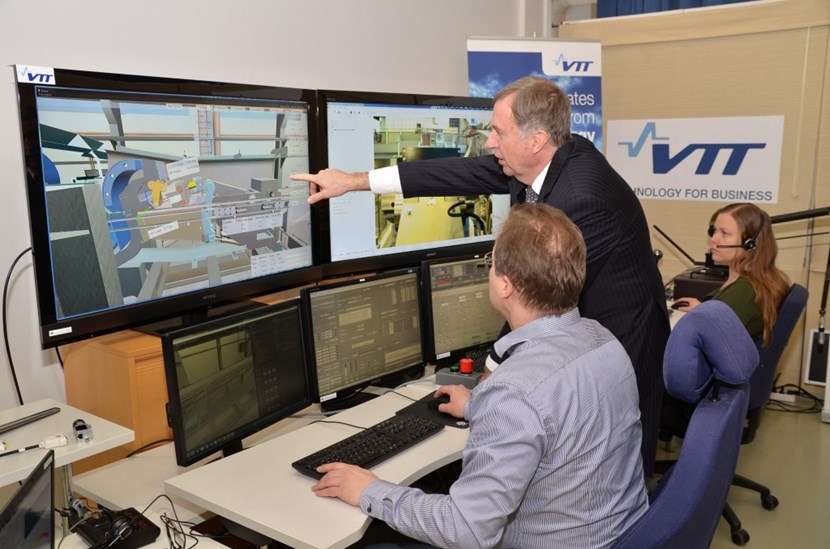 From the control room at the VTT Technical Research Centre in Finland, a mockup of an ITER divertor cassette is ''inserted'' into a 1:1 scale section of the ITER vacuum vessel. Research financed by the European Domestic Agency at VTT between 2011 and 2015 confirmed divertor cassette remote handling and installation procedures.
Relying on a water hydraulics system (since oil hydraulics are unsafe in such a nuclear environment) and virtual reality sensors (since there is no space for cameras or lines of sight), these 10-tonne puzzle pieces must pass through port cells within mere millimetres of the walls and other sensitive components inside the ITER Tokamak.


To develop an installation procedure, the VTT Technical Research Centre in Tampere, Finland, under contract with the European Domestic Agency, established the Divertor Test Platform DTP2, where researchers were able to demonstrate the demanding insertion procedures in several steps with real-size tools and components, culminating in a final test operation in 2015.


The final alignment of the 54 elements of the divertor in relation to the machine's magnetic axis is also critical—however designers cannot recommend the best configuration of the inner and outer rails until the exact magnetic axis of the machine is known, something that can only happen once the basic machine is assembled and First Plasma Operations are executed.


To permit eventual adjustments, divertor rail designers are planning a customization range in all directions of space, which can be determined to the right size after a geometrical 3D survey is performed inside the completed vacuum vessel.


This week's ITER NOW video (1.7) features the ITER divertor team at work. You can view it here.