A "corbel" for the crane hall

Partager Tweeter
Assembly preparation | A "corbel" for the crane hall
At the uppermost level of the Tokamak Building, on the lateral wall extending out from the Assembly Hall, workers are busy pouring concrete for what looks like a massive balcony. The 80-metre long, 3.2-metre-wide protruding element is not a temporary viewpoint for visitors, however. It is the "corbel" that will support steel pillars for the future crane hall. 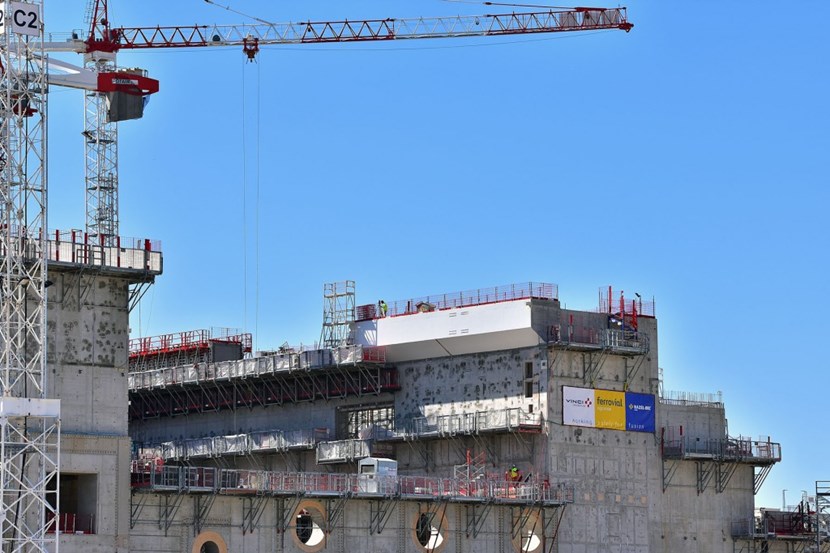 Jutting out from one of the Tokamak Building's lateral walls, the 80-metre-long corbel (already painted white) is 80 percent complete. Some 640 cubic metres of concrete, out of a total of 800, have been poured over the past weeks.
The corbel's size and shape, and the density of its reinforced concrete, are dictated by its function: not only will it carry part of the weight of the crane hall's steel structure (1,800 tonnes), but it will also need to withstand and distribute the tremendous forces exerted on the hall structure by the movements of the 1,500-tonne double overhead bridge crane.


The pouring of the corbel opens a new chapter in the construction of the Tokamak Building, the towering ziggurat that has come to symbolize the ITER Project throughout the world. Soon, with the creation of the crane hall in the continuation of the Assembly Hall, the whole appearance of the building will change.


First, at the end of the summer, 25-metre-high steel pillars will be deeply anchored in the corbel and in dedicated concrete columns on the opposite side of the Tokamak Building. Steel beams for the frame will then be lifted into position, spanning a distance of close to 50 metres. The building's appearance, by then, will take us back in time to the year 2015 when a similar steel structure was erected for the Assembly Hall. 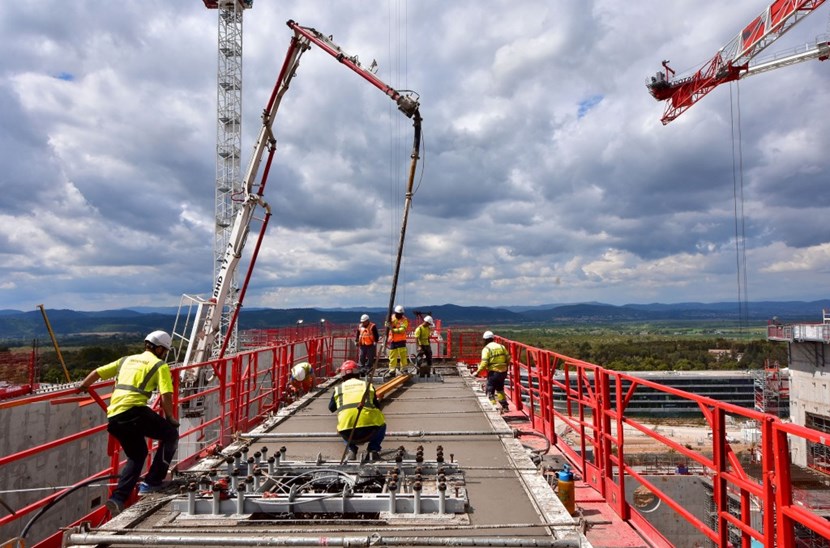 The anchoring system for each steel pillar is designed to withstand vertical compression loads in excess of 150 tonnes and a ''moment'' (lateral acceleration) of 220 tonnes per metre.
The visual change in the building's aspect heralds a major transition in the project. Corbel, supporting columns, steel pillars and frame all convey the same message: the Tokamak Building is being readied for the assembly of the ITER machine.


During this strategic phase, set to commence in the spring of 2020, loads will be transferred from the Assembly Hall to the Tokamak Pit either as single components or as "pre-assemblies" whose weight, in some cases, will be in excess of 1,200 tonnes.


The cranes that will be tasked with this operation were installed in the Assembly Hall in the summer of 2016, with rails running the whole length of the building. When the steel structure and associated cladding above the Tokamak Building is complete in March 2020, the temporary wall at the west end of the Assembly Hall will be removed and the crane rails will be extended all the way to the west wall of the Tokamak Building.