SPIDER gets a beam for its first birthday

Partager Tweeter
Neutral Beam Test Facility | SPIDER gets a beam for its first birthday
Just one year ago, on 11 June 2018, the world's largest negative ion source was inaugurated at the ITER Neutral Beam Test Facility with the ignition of a brief plasma in the ion source. In the twelve months of experimentation since, scientists at SPIDER have been stepping up the testbed's power in increments, integrating additional components, and adjusting the complex system of controls. Late May, the SPIDER team celebrated the acceleration—for the first time—of a beam of ions. 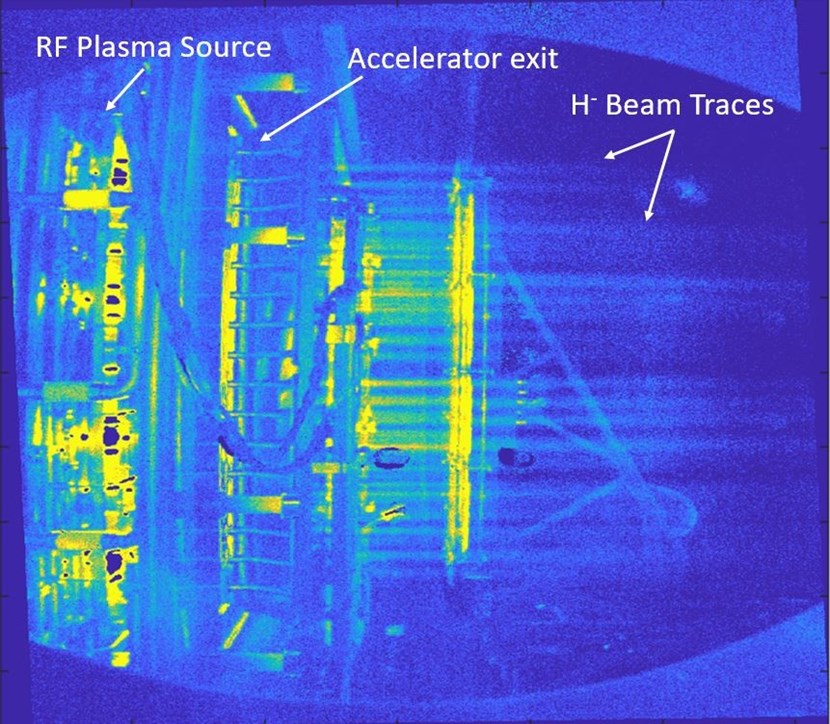 The light emitted when the accelerated particles interact with the background gas inside the vacuum vessel allows the visualization of the SPIDER beam (travelling from left to right in the figure).
At Consorzio RFX in Padua, Italy, ITER neutral beam heating technology will be tested on two testbeds. The first to come on line, SPIDER, is an ITER-scale negative ion source designed to demonstrate all ITER source requirements; the second (under construction now) is MITICA—a full-size prototype of ITER's heating neutral beam injector.


The components designed for the testbeds are the same components that ITER will be using on its heating neutral beams in ITER, which will allow the neutral beam teams to acquire valuable information about neutral beam operation.


For SPIDER, operation began on 11 June 2018—the moment the ITER Director-General pressed down on the button that triggered the ignition of a hydrogen plasma in the ion source for the first time, lighting up the SPIDER vessel for several seconds.


During the following months, researchers focused on the optimization and the careful control of similar plasmas, in an attempt to maximize the transfer of power to the ionized gas through four radiofrequency generators. The combined use of eight antennas—connected to the generators in pairs—has allowed the team to increase the power transmitted to the plasma up to 320 kW, about 10 times more than the power reached during the inaugural plasma. This result was achieved thanks to the progressive improvement of the gas pressure profile, a more detailed understanding over time of the behaviour of the powerful radiofrequency generators, and improvements in the complex control system.


Later, the focus was moved on the SPIDER extraction and acceleration system. This is constituted by a set of three gridded electrodes (grids) featuring 1280 apertures each, from which the negatively charged particles generated inside the plasma are extracted and accelerated via an increasing potential difference applied on the grids.


In November 2018, the second grid—the extraction grid power supply (EGPS)—was integrated into the plant. From that point, large current of particles (mainly electrons) could be extracted from the plasma and accelerated to few kilovolts. In parallel, the teams worked to verify the capability of the system to hold the high voltage without any breakdowns and installed specialized diagnostic tools including the STRIKE calorimeter, several spectroscopy lines of sight and CCD (charge coupled device) detectors for visible light.


Finally, on 24 May, the third and last electrode of the acceleration system was set at a potential of 30 kV with respect to the second one, resulting in the formation of a fast negative hydrogen ion beam (see figure 1). 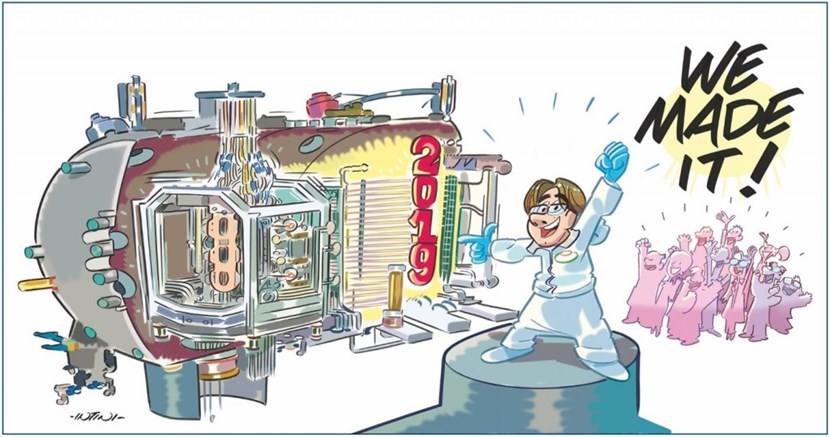 The achievement of the first hydrogen beam was celebrated by a commemorative strip by well-known cartoonist Stefano Intini.
This result was welcomed with great satisfaction by researchers from Consorzio RFX and the ITER Organization. While sustaining the plasma is an important part of SPIDER operation, the beam is the component that will allow researchers to demonstrate that the requirements of ITER—in terms of quantity of ions (60 A of current resulting in a 6 MW beam) and electrons, and in terms of uniformity—can be met by the technology. Although the characteristics of the first beam at SPIDER are far from satisfying such stringent parameters, the importance of this early achievement consists in demonstrating that all the complex plants that control the source and the particle accelerator can be synergistically operated together.


The acceleration of the beam, in particular, confirms the perfect integration of the high voltage power supplies, procured by the Indian Domestic Agency, within the complex electrical system of SPIDER, an authentic masterpiece of electrical engineering.


The next weeks will be devoted to an initial investigation of properties of the first low-power beam and to a thorough characterization of the source. The integration of a final component—the caesium evaporators—will allow the generation of a larger amount of negative ions on SPIDER and higher beam performances.


The race to generate a beam of neutrals carrying 16 MW of power (required for each of the ITER neutral beam injectors) has officially started.


For further reading on the development of negative-ion-based neutral beam injection, click here.