The way to assembly is open

Partager Tweeter
Council milestone #50 | The way to assembly is open
Passing an ITER Council milestone is always an achievement. Passing this milestone at this moment is much more than that: it is a demonstration that, despite the constraints imposed by the public health context, the ITER Organization, the European Domestic Agency and their contractors are determined to keep moving forward and to remain on schedule. 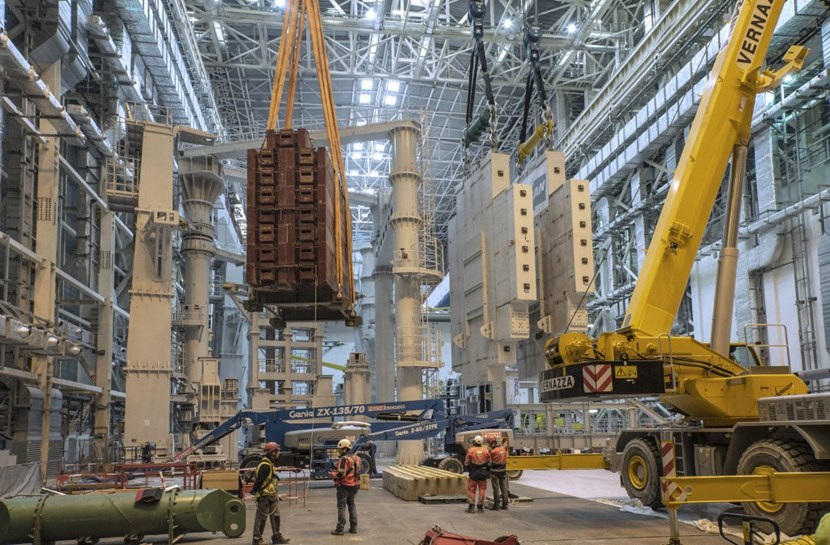 Totalling approximately 1,000 tonnes, the loads are ready to undertake their 170-metre-long journey from the entrance of the Assembly Hall all the way to the opposite end of the newly created crane hall.
ITER Council milestone #50, which was successfully achieved two days ahead of schedule late on 28 March, is of considerable significance for the project, as it opens the way for the launch of the machine assembly phase.


The milestone consisted in demonstrating that the heavy lift cranes could successfully travel between the Assembly Hall and the Tokamak Building in order to deliver components to the Tokamak pit.


Three actions were required: first, the completion of the crane hall structure; second, the removal of the temporary wall  separating the buildings; and finally, the verification of the overhead crane load path in the Tokamak Building.


The last operation, both spectacular and delicate, required validating the full 170-metre-long runway of the double bridge crane—from the entrance of the Assembly Hall, all the way to the opposite end of the newly created crane hall and back.


It was a display of Titans, with no less than 1,000 tonnes of steel and concrete test loads attached to the giant hoists of the bridge crane (more details in the image gallery below). 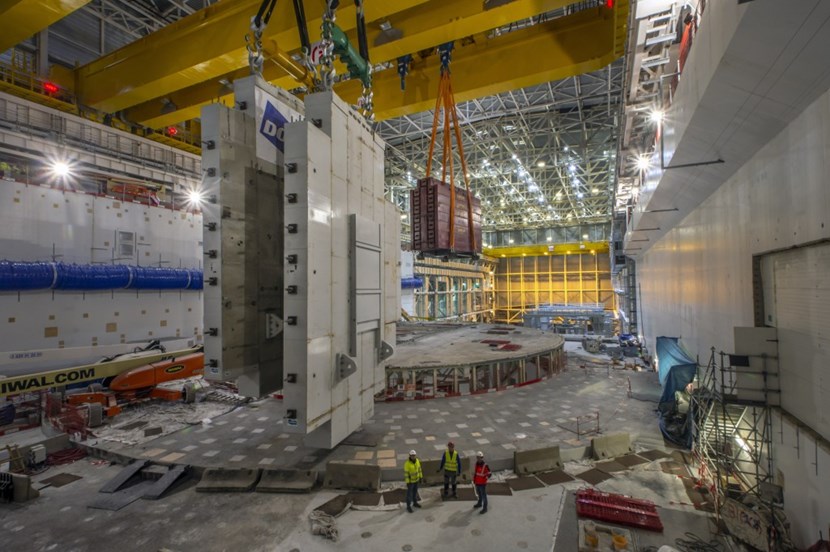 The main load has just passed the protruding lid that closes the assembly pit. The full theatre of future assembly operations is fully visible ...
Initiated at 8:00 a.m., the operation lasted well into the night and was only considered completed when the crane and its loads had returned to the Assembly Hall and were secured. By then Saturday had turned into Sunday, but 31 March—the official target for ITER Council milestone #50*—was still 48 hours away.


The crane and its loads moved slowly, taking long pauses at strategic locations: at the "seismic link" between the two buildings, at the threshold of the Tokamak Building, over the protruding lid of the Assembly Pit ...


All the while, metrology systems were monitoring the deflections that the loads were causing to the runway beams and steel pillars—essential information for validating the crane hall's structure and achieving the milestone.


With the temporary wall between the Assembly Hall and Tokamak Building removed, one could take in, for the first time, the full theatre of future assembly operations—a huge open space that even dwarfs the 20-metre-high vacuum vessel sector sub-assembly tools.


It was an awesome view that conveyed the unique size, complexity and beauty of ITER.


* Since early 2016, the ITER Organization has been tracking project progress against high-level milestones agreed by the ITER Council. Whether related to construction, manufacturing or deliveries—or rather to programmatic milestones like recruitment and contract signatures—these milestones are underpinned in the schedule by the many thousands of activities that make up progress to First Plasma.