A decisive year ahead

Partager Tweeter
Poloidal field coils | A decisive year ahead
Two poloidal field coils—PF6 and PF5—must take their place in the Tokamak pit before the sectors of the vacuum vessel are lowered into place. The final activity on these magnets—cold testing—is planned next year in the European winding facility at ITER, where work is also underway on the production of a third ring-shaped coil, PF2. 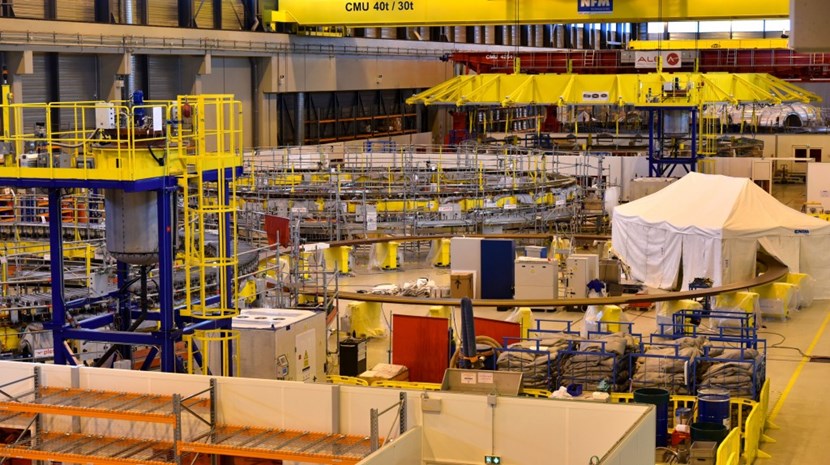 Tooling stations fill the 257-metre European winding facility from end to end. Poloidal field coil #2 (PF2) is in production, the PF5 winding pack is in its impregnation mould, and two cryostats have been assembled at the far end of the building for the cold testing of PF6 and PF5.
The year that sees the start of ITER machine assembly—2020—will also be a turning point for the European effort to procure five of ITER's six poloidal field coils*. From completing the on-site winding facility in 2012 and the installation of tooling, to the launch of qualification activities, the realization of the first production double pancake, and finally the stacking of the first coil... the road to fabricating some of ITER's largest and most technical components has been both challenging and rewarding.


"Everything about the production of these first-of-a-kind components has been challenging," says Byung-Su Lim, who leads the ITER Poloidal Field and Correction Coil Section and interacts close with the European Domestic Agency team and contractors. "Configuring the tooling and learning to operate it, qualifying every important production step, carrying out the manufacturing with accuracy and within tolerances, documenting every stage, working to deadline—teamwork has been a key element at every step of this process. All parties are looking forward to the important milestones that will be achieved next year."


The four largest poloidal field coils—PF2, PF3, PF4 and PF5—will come off the fabrication line in Europe's winding facility at ITER while a fifth, PF6, has been manufactured in China by the Institute of Plasma Physics, Chinese Academy of Sciences (ASIPP), under the terms of an agreement signed with the European Domestic Agency. 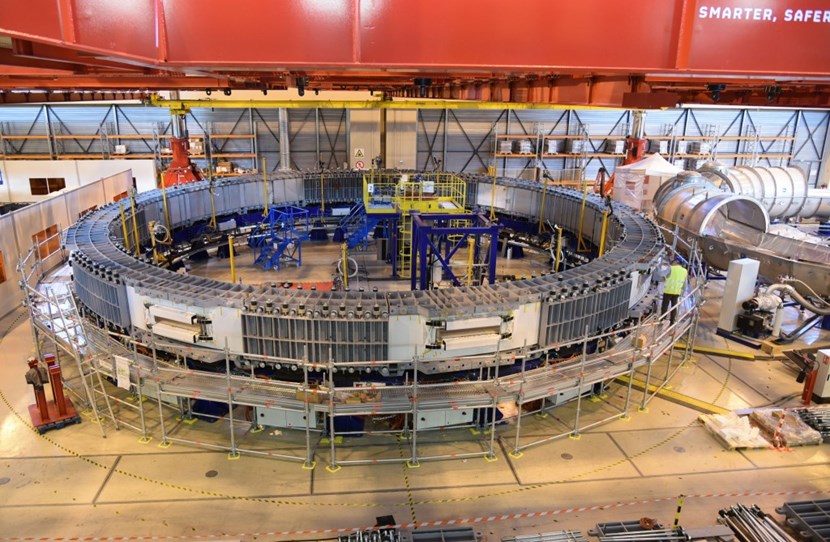 A mould has been assembled and welded around the first on-site production coil—PF5. After the impregnation process, which will last about three weeks, the coil will be prepared for cold testing at 80 K.
In order of completion:


PF6: The heaviest of the ring coils (although not the largest) was completed in China in September. Because it is the first poloidal field coil to be lowered into the pit, it will also be the first to be cold tested. Cold testing, which will be carried out in the European winding facility on site, will require approximately three months, counting time for the cooldown to 80 K and subsequent warm up and electrical testing at various stages. PF6 is expected at ITER early next year.


PF5: This is the first coil to be produced by European contractors in the on-site winding facility. Eight double pancakes were produced for this coil and individually impregnated; now the winding pack (with all pancakes stacked and joined) is nearly ready for impregnation (photo above). During impregnation: the mould is first heated to 90 °C for 96 hours to dry the coil insulation and then cooled to 50 °C; roughly 2,200 litres of resin are injected over a period of 60 hours; the resin "gels" for 10 hours at 110 °C; the resin "cures" for 60 hours at 140 °C. Pre-checks, mould conditioning and impregnation are scheduled to begin in February. Following cleaning, dimensional testing, and electrical testing, PF5 will be next in line for cold testing in a cryostat that has been assembled on site to match its dimensions (ø17 m).


PF2: The production of PF2 is well advanced—the six double pancakes required to build the PF2 winding pack have been wound and four have been impregnated. PF2 fabrication is benefitting from lessons learned on PF5 and—as it shares the same diameter—the coil is being manufactured on the same tooling. The projected finish date for PF2 is September 2020.


PF3 and PF4 are much bigger coils (ø24 m). With the winding activities completed for PF2, contractors have begun to expand the tooling to these new dimensions; work to adapt other tooling stations will follow. The commissioning of the winding line will begin in April.


Next year, the first-completed coils will be removed from the winding facility and placed on temporary supports inside of the Tokamak pit (PF6 in August; PF5 in November).


See a recent report on the fabrication of PF5 and PF2 on the European Domestic Agency website.