Rob Goldston: "Progress in fusion has been amazing!" 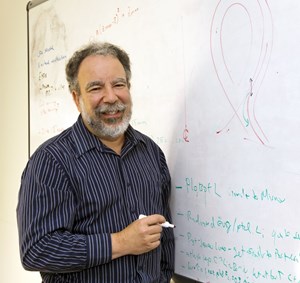 Rob Goldston joined PPPL as a graduate student in 1972, earned his doctorate in astrophysics from Princeton in 1977, and served in positions of increasing responsibility, including becoming a professor in the University's Department of Astrophysical Sciences, until being named the lab's director in 1997.
In every field of human creation, the 1970s were an exceptionally exciting decade. Everything seemed to be open for exploration: the arts, the sciences, politics, the economy ... Inventiveness and inspiration were the rule that drove artists and physicists alike.
Fusion research was no exception. The field had been completely transformed ten years earlier by the introduction of a new architecture in fusion machines — the tokamak.
As they aimed to change the world, fusion research and plasma physics attracted brilliant and creative brains. Rob Goldston, who came to Princeton University in 1972 as a graduate student in the Program in Plasma Physics was one of them.
He reflects here on the forty years gone by, from his first experiments with the Adiabatic Toroidal Compressor to his present involvement with ITER.
R.A.
Altitude seems to have played an important part in the early history of fusion. Lyman Spitzer had the intuition of the "magnetic bottle" while skiing on a mountain slope in Aspen, Colorado and—if we are to believe fusion lore—you had your own epiphany on a mountaintop in Vermont some 43 years ago that changed the course of your career. Can you tell us about this moment?


When I entered Harvard University I wasn't sure if I wanted to study psychology or physics, so for my first year and a half I took the courses I needed for both majors. I was pretty dissatisfied with my psychology courses —it didn't seem to me that my professors had much in the way of real knowledge to impart. On the other hand, my physics teachers clearly knew what they were talking about and physics problems had definite solutions. With enough thought ... I could even find those solutions. I found myself enjoying the big red books filled with mysteries and the fun of unravelling them.


On the way home from Montreal with a friend, I had him drop me off at the base of Mt. Mansfield in Vermont. I chained my bicycle to a tree and started climbing. I spent the night in a cabin two-thirds of the way to the peak and the next morning headed up alone to the bald, stony top. After some distance I hung my jacket on a tree, figuring I would pick it up on the way back—my compass and map, however, were in the jacket pocket. I got to the top and after a moment looking around realized that I had lost track of direction. I had visions of newspapers coming off a printing press, like in a 1930s movie, with headlines about a young man found dead on top of Mt. Mansfield.


In her 1990 book on fusion history (''Fusion, the search for endless energy''), author Robin Herman described young Rob Goldston as wearing ''black Cossack mustache and bushy hair black hair that grew out and up so that the circumference of his head increased as weeks went by.''
This, unlike the view, engaged my emotions and my mind. I reasoned that if I walked down from the peak in a slowly expanding spiral I would have to cross the trail and find my jacket, map and compass. This is exactly what I did and exactly what happened. What a joyous consequence of using logic and geometry!


I spent the rest of the day enjoying fun things like jumping between boulders and "feeling" gravity. I came to the conclusion that what was fun about being human was playing with energy. For example Mozart eats an omelette in the morning and composes a symphony in the afternoon. As I looked down on the valley below and saw smoke coming up from the houses, it occurred to me that the key is to access energy without making a mess in the process. And so I thought about fusion, and thought that maybe I could contribute. I returned to university and ultimately graduated magna cum laude in physics—I don't think many students switch from psychology to physics in their junior year! I worked at the MIT fusion lab during my summers, and then went to graduate school at Princeton.


Entering the world of fusion research in the mid-1970s must have been exciting—one scientific and technical breakthrough followed another. Did you feel that the Holy Grail was close at hand?
I understood from the beginning that fusion energy was not going to happen overnight. I was then, and I continue to be, happy standing on the shoulders of giants and seeing a bit further towards our goal. And I knew then, as I do now, that we will be able to make industrial levels of fusion energy. I am confident that ITER will prove this. All along, however, I have recognized that there will be big challenges to making fusion economical.


The Adiabatic Toroidal Compressor investigated a technique for increasing the temperature and density of tokamak plasmas during the 1970s.
What attracted you more, the game-changing nature of fusion as an unlimited energy source, or the intellectual challenge of understanding the wonderful and fascinating tricks of plasma?


I liked them both. The two biggest highlights of my early career were one of each type.


In 1978, I got to report at the IAEA Fusion Energy Conference on the breakthrough towards fusion energy that we made with neutral beam heating on the Princeton Large Torus (PLT), achieving ion temperatures in the range of 5 keV for the first time ever.


The British team was especially sceptical about these results, given the problems that were uncovered with their early ZETA experiments when the measured neutrons proved not to be thermonuclear. The team organized a special session to dig into the PLT results with a tremendously long list of questions. I represented the Princeton group to an audience of the most distinguished plasma physicists in the world, and worked through the answers one by one. People went away satisfied, and I went away thrilled. That was on the fusion energy side.


As for the thrill of the intellectual challenge, our group discovered a new instability on the Princeton Divertor Experiment (PDX) that barred the way to higher plasma pressure. We called it the "fishbone" instability, based on the signals we saw on the magnetic pickup coils. By doing numerical calculations one night soon after the discovery, I figured out that the instability was traveling around the torus in synchrony with the trajectories of so-called trapped beam ions, and therefore was very likely directly driven by them. At that moment, at my desk in the middle of the night, I was the only person in the world who understood this important piece of physics. There is really very little in life that compares with such a thrill.


The Princeton Large Torus (PLT) experiment used neutral beam heating to achieve then-record plasma temperature of 60 million degrees Celsius in 1978.
When did you realize—or did you know it right from the start—that the road to fusion energy would be much longer, complex and costly than expected?


As I say, I knew all along that fusion was going to require a huge scale-up from our experiments. My friends in graduate school had a good laugh at my expense when I came to dinner one evening with oscilloscope pictures showing signals from 31 fusion neutrons.


Three years after I got my Ph.D, in 1980, the US Congress passed the Magnetic Fusion Engineering Act authorizing a budget for magnetic fusion energy development that was pretty hefty. Twenty-three years later I led a subcommittee for the Fusion Energy Sciences Advisory Committee that examined the future development costs for fusion energy. After we had submitted our report I looked back at the 1980 Congressional authorization and—if you added in what had been spent between 1980 and 2003—our cost projection was about the same. But fusion had been funded at about one-third of the rate specified in the Congressional authorization. By then I had learned about the difference between "authorization" and "appropriation." The latter is what really counts. I had been director of the Princeton Plasma Physics Laboratory for six years by that time. 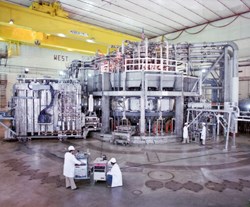 The Tokamak Fusion Test Reactor (TFTR) set then-world records by producing 9.2 million watts of fusion power in 1994 and reaching plasma temperature of 510 million degrees Celsius in 1995 before being decommissioned later in the decade.
From the Adiabatic Toroidal Compressor (ATC, Princeton) of your beginnings in graduate school, to PLT, to the TFTR physics program that you headed soon after the machine entered operations, and on to ITER, you have been involved with four generations of fusion devices. How would you describe the progress that was accomplished during the past four decades?


Amazing. We made about one-tenth of a watt of fusion energy for about one hundredth of a second on ATC, and we will make hundreds of megawatts of fusion power in ITER for 15 minutes and longer. That is 13 orders of magnitude—10 million million. Quite a scale-up. We have also learned more than a little high-temperature plasma physics along the way.


In 2006 you wrote an article entitled "Is Fusion Research Worth It?" In short, what would be your answer today?


Yes. If fusion can be significantly better than other energy sources, however you think about better (cheaper, safer, cleaner, less risk of proliferation) then even if you have a moderate chance of success, the Net Present Value of the research is much greater than its cost.
How do you see the scientist's relationship to large societal issues? Do you think a scientist has a special responsibility?


I do think scientists have special responsibility to examine the societal issues associated with their work, and, more generally, in areas where they have particular knowledge. We don't have any special moral authority to judge good vs. bad, but we do have the capability to see the potential outcomes of scientific and technological R&D in ways that others cannot. We have the responsibility to make these potential outcomes clear to the public.


This theme in fact motivates my undergraduate course at Princeton, "The Science and Technology of Nuclear Power: Fission and Fusion." The course is for science and engineering majors, not for political scientists. We stretch their scientific capabilities by digging into the fascinating underlying physics of both energy systems. As I developed this course, I found it pretty amazing how much you can understand about fission and fusion energy with just undergraduate physics. By the end the students understand in some detail what happened at Fukushima and how dangerous it is to have no plans for "beyond-design-basis" accidents, they know for themselves how to calculate the number of weeks it would take Iran to produce the material for a bomb if it broke out from IAEA safeguards, and they know what the scientific and technological issues are for fusion—including ITER's role. So, hopefully, they are both better scientists and better citizens.
What message would you send to the ITER staff?


Keep at it! We need ITER to succeed, and we need your energy, your insight and your enthusiasm for it to happen.